Spare parts for motorcycles and scooters 50 and 125cc

50Factory was born from the owner's, Willy Marolleau, passion for 50 motorcycles. Since June 2009, the company has been specialized in spare parts for 50cc3 bikes. We were first called “50 occaz”, and the site was initially for selling used spare parts for 50cc motorcycles. In 2013, « 50occaz » became « 50factory », offering both new and used products.

In 2016 the team is structured and different services are set up to best meet the expectations of customers. 50 factory completes its range of products distributed with original spare parts but also partnerships with leading brands of engine and exhaust parts. A network of partner garages is set up.

In 2017 a reorganisation is made to separate scooter and 50cc parts and to simplify the searching process on the site 50factory.com. A paper catalog is created for professionals to simplify their parts searches. A major expansion project took place at the end of 2017, making it possible to double the storage area. In December was launched a new range for used parts for motorcycle 125cm3.

In 2018, the range of spare parts continues to grow concerning 50 cc and scooter 50cc new parts, both original and performance parts. The company continues to grow and to hire in order to support the development of new services.

In 2019, an enlargement of the storage area is again carried out for a floor area of ​​540m2 over 9 meters high, making it possible to create a storage platform with 3 levels. New ranges of new parts are appearing on the site with the creation of the moped and solex universes for which the emphasis is placed in particular in order to satisfy the greatest number of vintage cycling enthusiasts.

In 2020, 50Factory is still developing strongly by improving its internal logistics processes and by ever expanding the product offering ofscooter universe 50cc and motorcycle 125cc. One of the other priorities is given to improve the user experience in every way. Numerous projects are underway to develop the activity even more.

A wide range of parts dedicated to 50cc, scooter, 125cm3 and moped

Our products are listed under 5 categories:

To meet customer needs, we offer both original new parts, adaptable parts and used parts. New parts are selected from best suppliers of original and adaptable parts and always at the best value for money. Used parts come from vehicles in return for insurance. They are disassembled, cleaned and tested by our own mechanics. After checking their operating condition they are put on sale. This work allows us to offer rare and difficult to find parts.

Thus our catalog has 36.000 references, which makes it the largest catalog dedicated to the purchase of accessories and spare parts for 50cc and 125cc motorcycles.

It is possible to deliver
in 24H

All spare parts
are really in stock

One team with more
than 50 people

Discover below the various stages of the operation of the company 50factory as well as the associated positions.

Our buying department procures new parts from distributors and manufacturers.

Receipt of new parts and put in stock in our warehouse by our storekeepers.

Disassembling motorcycles to recover used parts by our mechanics.

Taking pictures of new or used parts by our upload team.

Retouching pictures and creating product sheets to be uploaded in out site. 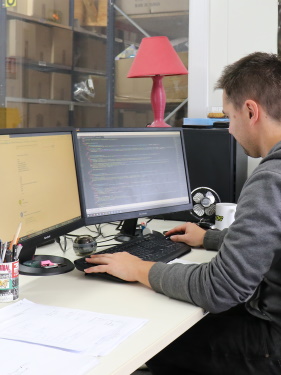 Our IT department develops the website, and manages communication and social networks.

Web and phone support by our customer service and our advisors.

Easily find all the parts you need using our search bar and product filtering system. You can also use the filter located on the left of the site to tune your searches.

Five simple steps enable you to quickly place your order.

Payment is via Secure payment with the (secured by CM-CIC), Paypal or bank transfer.

Receive your pieces in 24h via Chronopost or in 2/3 days with standard french postal service. See delivery details.

For assistance with the maintenance and repair of your motorcycle, please refer to our documentation in particular our technical tutorials and all our brands.

In the event of an incorrect order, or if you need to make a return, you can return unwanted parts.

HERE 100% OF THE PARTS INDICATED IN STOCK ARE REALLY IN OUR DEPOT!

This product has been added to your cart

You have already added this product to the cart or there is not enough in stock.